• Needed ticket to the Natural Reserve

Arrival, reception at the airport and transfer to the hotel. Accommodation. If your flight arrives early, do not miss the opportunity to visit Punta Tombo, the largest colony of Magellanic penguins in the country. This tour is available from mid-September to March. During the tour, we take a walk through the interpretative trails. Afterwards, time for lunch (optional). At the end, return to Puerto Madryn.

Full day in Valdés Peninsula, declared a Natural Heritage Site by UNESCO due to its geography, flora and fauna. Departure from Puerto Madryn towards Puerto Pirámides. There from July to November, it is possible to take a boat trip where you will experience watching the Southern Right Whale (optional). Continue visiting Punta Piramides where we can see a colony of South American sea lions. After lunch (not included), we arrive at Punta Cantor and Caleta Valdés from where it is possible to observe an elephant seal colony. Back to Puerto Madryn, we stop at the Carlos Ameghino Isthmus to visit the interpretation center.

At due time, transfer to the airport.

Day 2: The excursion to the Southern Peninsula Valdes could be replaced by Northern Peninsula visiting San Lorenzo penguin colony from mid-September to March. 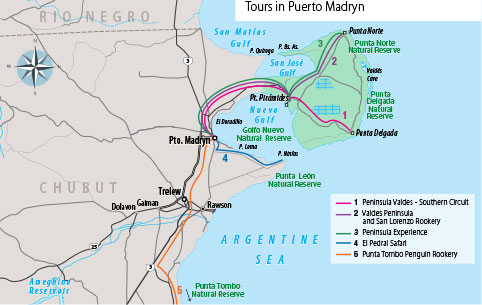 We will set sail from Puerto Pirámides in a motor boat, to sail the coasts of Nuevo Gulf. Along the way, we will have the chance to spot the Southern-Right whale, which reaches these coasts to mate and give birth to its calves. The behavior of these magnificent mammals is at the same time amazing and endearing, and the possibility to watch them from a short distance proves an unforgettable and unique experience. The sail is also available in zodiac boats and with a semisubmersible vessel for subaquatic watching.

Season: July to November. Start and end of season may slightly vary due to migration behavior of the natural species.

From mid-September to the end of March, Magellan penguins visit the area to mate, give birth and feed their chicks, so they can be observed in: Punta Tombo, south from Puerto Madryn. Flight permitting, it is recommended to visit it on the same day of arrival directly from the airport or on departure day before heading directly to the airport. San Lorenzo located within the Península Valdés Natural Reserve, which makes it possible, from mid-September to November, to admire both the whales and the penguins on a single day tour.

BACK TO ARGENTINA / CITY TOURS